Bookworm Adventures is an all-ages spelling-based adventure game. In this game, you take on the role of Lex, a humble bookworm who goes on a quest through the books in his library. As Lex goes on his adventure, he will encounter and battle a range of opponents, including creatures from mythology and characters from classic novels.

The combat mechanic in Bookworm Adventures is based around the deadliest of fighting arts: spelling! Each fight begins with a grid of letter tiles. Lex spells out words from the available tiles; the longer the word, the more damage it does. Enemies don't bother with such niceties; they simply attack, inflicting damage on Lex. Some even destroy tiles, infect them so that they harm Lex or 'lock' them so that they can't be used.

More complications come from special tiles and items. Special tiles have abilities that inflict additional effects such as decreasing the damage of enemy attacks, healing Lex, or doing automatic damage every turn. You can earn these gem tiles by crafting particularly impressive words. Other special effects come from the items Lex earns during his quest; these can add to Lex's health, reduce the damage he takes or cause special effects. For instance, the powerful Hand of Hercules does extra damage when Lex spells the name of a metal such as 'TIN' or 'BRONZE.' Potions are one-shot items that heal Lex, power up his attacks or remove harmful conditions from him.

Throughout the game, you'll also compete in minigames that challenge your memory, vocabulary and knowledge. Succeed in these and you'll earn bonus gems and potions to help you in your quest. As you battle your way through the world of books, you'll also gradually unlock new minigames that you can return to if you want to play the game for a few minutes. 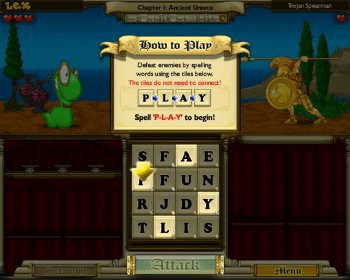