Prevent your computer from going to sleep

If you have problems with your PC locking or going to sleep, caffeine will keep it awake. It works by simulating a keypress once every 59 seconds, so your machine thinks you're still working at the keyboard, so won't lock the screen or activate the screensaver.

The icon is shown above - it's the leftmost one in the task tray, and this is all you see. Double-clicking the icon empties the coffee pot (that's what the icon is) and temporarily disables the program. Double-clicking it again refills the pot, and will keep your machine awake.

By default the app starts enabled, and works every 59 seconds. There are some command line switches you can use to alter this behaviour:

Caffeine works by simulating an F15 key up event every 59 seconds. Of all the key presses available, F15 is probably the least intrusive, and least likely to interfere with your work.

If you think any of these might cause you a problem, set the -useshift command line parameter.

Caffeine user humancar2n has put together a short YouTube video showing how the app works.

Do you need this functionality on your Mac? Lighthead Software have written a separate app, also named Caffeine, which can help you out. 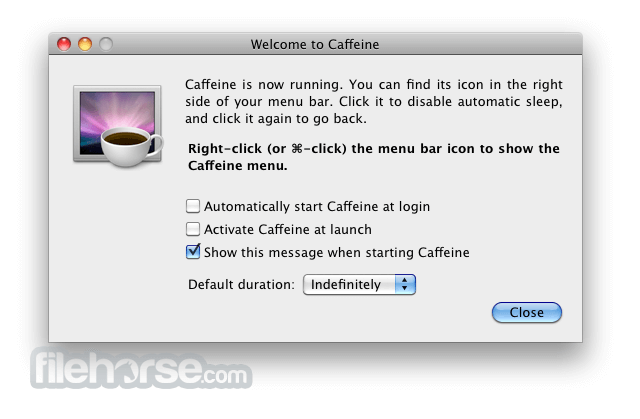 Tooltip replaced with a new one which works more reliably

Option for old icons added, 'cos not everyone likes the new ones

Icons updated slightly to show up better on a white background.

Type in About box corrected

-apptoggle will re-show the dialog if it was originally shown

Simulated keypress changed from right context menu key to F15 as this is likely to be even less intrusive.

Simulated keypress changed from shift to the right context menu key (at the suggestion of Kevin Kleinfelter) as this is likely to be less intrusive.